Click to Play
I've been a Talking Heads fan since the mid-eighties, so it was my extreme pleasure to interview one of my idols, David Byrne. The man is a literal genius. He is a Rock and Roll Hall-of-Famer, an author, and has won Grammy, Oscar, and Golden Globe awards.

Listening to the interview, it's pretty obvious that I was new to interviewing. It's a quick one.

My big mistake probably was not recording the call as it happened. David called me during my mid-day show on 89X. I answered the phone, and we chatted for a few minutes off-air. We discussed why the show was postponed, and that he went to Detroit's Garden Bowl instead (how cool would it have been to accidentally run into David Byrne on a Sunday Bowling night?). There was a pause, and then he asked me "so, is that it?" He thought (understandably) that we had just done the interview! I said "no, we're gonna go live", and he was cool with it, but I think it made the interview not quite as interesting or as long as it could have been. Less spontaneous.

I was later told by the Warner Brothers record representative that David enjoyed talking to me. It's hard to know if he was telling the truth, because it's a record reps job to blow smoke at you. I think he was being truthful (I hope).

Later that day, when I got to meet David in person, I found him to be kind, level-headed, and a really nice fellow. I'd like to meet him again.

Read the David Byrne entry in the Ticket Stub Project. 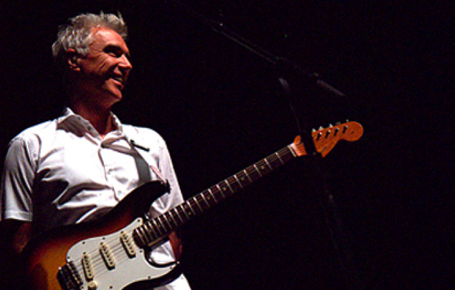