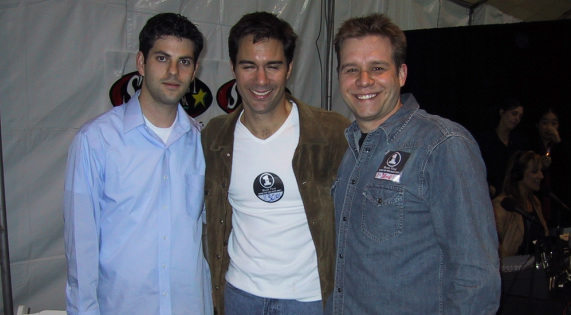 "I'm gonna close my eyes and pretend I'm not here..."
When these big media interviews happen, we are all in a big room with tables and microphones set up.  People walk over to you and ask if you want to interview this person or that person. It all happen very quickly.

Eric was the host of the My VH1 Awards show, so we talked to him.  What you don't hear in the interview is the trouble we had with the headphones, and the part where I told Eric that I didn't remember him in the movie Free Enterprise, when in fact he is a main character.  I saw it before he was "Eric McCormick From Will & Grace", so I didn't make the connection!  He handled it as well as he could.

Regarding the headphone trouble, my on-site producer, Ron (pictured above) had this memory:"He did slam them down, but did not damage them. I think the whole deal with that interview went sour when the handler kept telling us to be sure we announced his name correctly; emphasizing that it was Mc-Cor-mack, not Mc-Cor-mick."