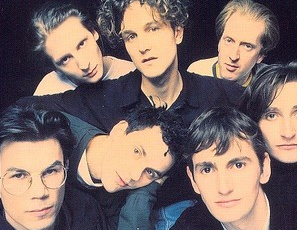 (I think he's the guy in the lower right corner)
This is the first radio interview I ever conducted.

James is a band from Manchester, England. This interview is from about a year before they hit it big in the States with the song "Laid".

SInce this was my very first interview, I was nervous, but I think I did ok. You'll hear such fascinating questions such as:
I was pretty good at reading the press releases that were sent to the station, and then asking questions based on them. Eventually, I stopped doing that, but in my first chunk of interviews, it's pretty obvious that I was was relying on them pretty heavily.