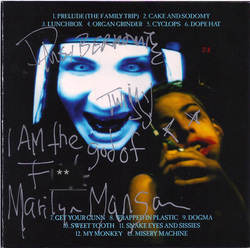 ** The "F" is for "Fluffy Bunnies"
In November of 1994, I was hired at 96.3 in Detroit. I was told I was going to co-host a show called The Industrial Revolution Saturday nights. Nobody asked if that was the kind of thing that interested me. It wasn't.

I knew little-to-nothing about "industrial" music beyond the basics. As I mentioned in my Ministry concert re-cap, loud, hyper guitars (or electronics) + yelling wasn't really my thing. So I'm pretty sure the show went straight downhill once I came aboard.

There is an audience for this kind of music, and when I was an angry, young 20-something it was ok. But I was getting married soon, had a great job, a new car and didn't really have much to feel "young and angry" about.

I was impressed a couple of years earlier when I saw Marilyn Manson open for Nine Inch Nails at the State Theater. Both bands put on a great show.

Talking to Marilyn was really interesting, since he knows exactly what he's doing. He's very smart. He knows exactly which buttons to push and when. Very nice, very well-spoken, not "scary" at all.

The band came in before their show on Feb 4, 1995. It was sold out, so I didn't really get the point of promoting it, but I guess it made the station sound cool (except for whoever's chewing gum right into the microphone (I'm looking at you, Marilyn)).

Before the interview, we offered the band drinks from the Pepsi machine. They refused, because (according to them) Pepsi was connected to the Mormons who don't like Marilyn Manson. We may have gotten them water instead.

The interview was on the radio, so there are no swear words, but it's definitely not for the kids.