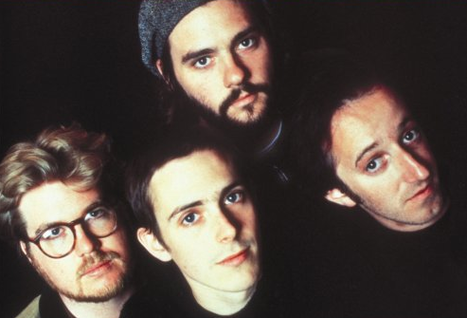 Aside from the fact that I was still honing my interviewing abilities, this one is fun to listen to, because the band actually played two songs during the interview. Normally, a band performing live is pretty cool. But in this case it was also very unusual.

The 89X studio at the time was the size of a closet. There was room for two chairs, an audio board, CD & record players, plus a small library of CDs. Seriously. Having more than two visitors in that room was super-tight. At least there was a nice, big window.

We were all jammed into this box while this recording was made. To accommodate the band, the band used one microphone, while Glen, the lead singer, used the other. Here's the thing: I was using the same mic.

When you listen to the performance, picture me, sitting down, introducing the band. Then me simply leaning back in my chair as far as I could, while Glen stood and sang above me. It was quite surreal. I was two feet from his face.

Listening to it now, it kind of sounds a bit confrontational, but I think we all got along well, and we were just all trying to be funny in that early 90's, "Gen X", sarcastic slacker kind of way.

I just can't remember why in the world I had to play two songs on the radio first, making them wait.